The MOSER 1400 has become a global success story among hair clippers due to its striking design, extraordinary performance, and precision "Made in Germany". More than 40 million units have been sold in more than 100 countries since 1962!

Sustainability and renowned Black Forest precision "Made in Germany" have resulted in a lot of people trusting the MOSER 1400, which almost looks the same today as it did 30 years ago. On the inside, however, its technology always reflects the current state of the art. A significant investment in new production technologies ensures a high degree of product and process expertise.

Unfortunately, due to its success, our classic model is often copied. Always check that the machine you purchase is authentic and comes in the original packaging. Only buy from a dealer you trust! You can find MOSER dealers near you in our dealer directory. 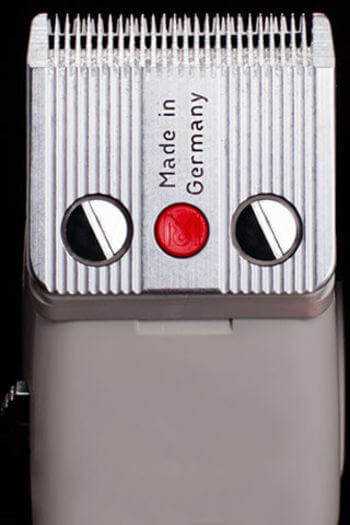 Reliability, functionality and sustainability are the results of Black Forest precision combined with our proven know-how.

Various tests conducted during production of the MOSER 1400 ensure the highest degree of quality and safety. In addition, important parts and components are regularly subjected to endurance tests.

In order to continuously improve the quality of our products, we are maintaining a VDE-certified quality management system according to ISO 9001:2008.

Each MOSER 1400 is subject to a 100% final inspection. They undergo a manual clipping test that focuses on perfect cutting performance, the optimal setting of the clipping pressure and the blade-to-comb distance. Following an operating noise and power input test, each machine is cleaned again.

The blade set is the heart of each MOSER 1400 hair clipper and it is ultimately what provides perfect cutting performance.

Since the start of production in 1962, our blade sets were ground manually – a process that requires a lot of experience and precise visual judgement.
Computer-controlled machines have taken over that function nowadays. The result is even more precise and sustainable and it guarantees consistently high quality.

The elaborately ground, stainless steel full metal blade sets made from hardened steel receive their unsurpassed cutting performance from the most innovative production technologies. They go through many different production processes, are chrome-plated, refined with superfinish and undergo a 100% final inspection.

UNIVERSAL
Very small, light and easy to use.

LONG LIFE
Long-lasting motor to meet the demands of professionals.

The MOSER 1400 and Moser 1400 Mini are available in many different colour schemes and with various accessories. For additional product details, simply click on the respective device.
NEW:
As of now all high gloss 1400 will have an additional classy logo embossment on the top of the housing.

Ensure a long operating life by remembering to regularly clean and oil the blade set regularly.

Ideally, the blade set should be cleaned and oiled with a brush after each haircut.

ASSEMBLY OF THE GUIDE PIECE: SLIDING KEY
Please use this tutorial to assemble the guide piece.

At the end of 1946, engineer Kuno Moser entered Kuno Moser GmbH, which was founded in 1938 as Wolfgang Blessing KG, into the commercial register of Villingen.

In that post-war winter, he repaired the production barracks in Unterkirnach. He was soon able to once again produce turned parts and then micrometers, vaporizers, lighters, and other much needed small parts. The number of employees grew and, when focusing on electric razors and hair clippers, Moser soon found a recipe for success. The company moved into the new building on Roggenbachweg in 1957. Here, the first hair clippers were built in 1959. The first model was called "Famos", which is German for "excellent" and an abbreviation of "Firma Moser" (Moser Company). The production of the MOSER 1400 began in 1962.

In the mid-1960s, Moser employed 150 people. The company founder retired in this era of expansion. The Ebner family from St. Georgen took over the company in 1966. During the boom years of the 1970s, the production facilities were expanded as much as possible. The new factory at the edge of the city was built in 1981. In 1985, Moser had 280 employees and the production barracks of the founding period were torn down.

The decade since the end of the 1980s saw Moser expand beyond the Black Forest. The result of the internationalization strategy was the merger with the American Wahl Clipper Cooperation, the globally leading manufacturer of hair clippers, in 1996. Since 2002, the company has operated as Wahl GmbH.

ERGONOMICS AT HOME AND AT WORK - by Hama FOR PREVENTION OF HEALTH PROBLEMS
July 2, 2020

Back to the top